With Zimbabwe it is a classic case of being “so near, yet so far”. Vice President Joice Mujuru was adored by President Robert Mugabe who, in the last 10 years, gave enough signs that he wanted her to take over from him when he leaves office. But on 10 December, she was sacked, paving the way for her rival Emmerson Mnangagwa, now Mugabe’s likely heir apparent. Mabasa Sasa reports from Harare on the dramatic turn of events.

For years, Zimbabwe has been a crucible of political rivalries, with storylines steeped in intrigue. Then came the 10 December ruling ZANU-PF’s Congress, and the drama peaked once more. This time round, the plot centred on President Mugabe and his elite cast, which included Joice Mujuru, his vice-president from 2004 to 2014, Emmerson Mnangagwa, his new deputy and loyal ally, and Grace Mugabe, his wife.

Driving the unfolding plot has been the succession battle. Who will one day replace the 90-year-old Mugabe? For a long time, Mujuru and Mnangagwa were seen as the two possible candidates lying patiently in wait, with Mai Mujuru (as she is popularly known) the favourite. Well, that was before the events that led to 10 December, the day Mujuru was fired from her post of 10 years.

The sensational turn of events began in earnest around September 2014 when First Lady Grace Mugabe, who had maintained a low political profile up to then, publicly accused Mujuru of plotting against her husband, the president. The accusations were wide-ranging. According to a close aide of the president, who spoke to New African anonymously, Mugabe had known about scheming within ZANU-PF for several years, and spoken privately about the goings-on within Mujuru’s clique. The President had said: “I have fought and won many wars in my lifetime. I am not about to lose this one.”

So why did Mugabe wait this long to remove Mujuru?
Several factors were at play. First, there was an external attempt to remove Mugabe from power. From 2000 right up to the present, Britain, USA and their European and other allies have been pushing a regime change agenda against Mugabe, using the MDC opposition party and recently, Zanu-PF insiders as their front. With such a threat bearing down on him, Mugabe could not afford to divide his efforts by taking on his erring lieutenants prematurely.

Second, there was the small matter of the 2008 elections, which Zanu-PF lost for the first time to the MDC led by Morgan Tsvangirai (who also beat Mugabe in the first round of the presidential poll, by 47% of the vote to Mugabe’s 43%).

The aftermath of the elections – which led to a power-sharing government with Tsvangirai (from 2009-13) – was so serious that Mugabe did not want it to be affected by a battle with some of his most senior lieutenants.

However, in July 2013 Mugabe won a commanding victory in yet another general election. This set the stage for him to launch his fightback against the internal conspirators. And fight back he has done – sacking Mujuru and eight ministers on 10 December. But most telling was his choice of Emmerson Mnangagwa as Mujuru’s successor.

‘Crocodile’ – the anointed one
While it has never been easy to decipher what Mugabe will do next, it became increasingly clear in recent months that Mnangagwa, the justice minister and a long-time ally, would finally become the number-two-man in the country.

What was intriguing was that exactly 10 years ago, Mnangagwa lost out on the vice-presidency to Mujuru at the very last minute.

Back in 2004, it looked pretty obvious that Mnangagwa would ascend to the helm and position himself as Mugabe’s successor. Instead, Mnangagwa and his allies were routed, with many of them either suspended, expelled, or demoted after they were accused by the pro-Mujuru camp of seeking to oust Mugabe – the same charge that has become Mujuru’s undoing.

At the time, Mnangagwa, popularly known as “Ngewna” – the Crocodile – took the hit on the chin and now, 10 years later, he stands poised to lead the country when Mugabe finally calls it a day. Although it must be said that one can never be completely certain that Mnangagwa is Mugabe’s preferred successor, insiders suggest that the “Crocodile” is the anointed one.

Born in southern Zimbabwe in 1946, his family moved to the then Northern Rhodesia (today’s Zambia) in 1955 and he was expelled from a technical college in 1960 for anti-colonial political activism. At just 16, he was already an executive member of the college’s branch of the United National Independence Party (UNIP), the party formed by the man who won independence for Zambia, President Kenneth Kaunda.

UNIP asked him to help organise their Chililabombwe branch up to 1961, after which he went to Lusaka, the capital, and was elected secretary of UNIP’s Youth League.

His return to the land of his birth saw Mnangagwa participate in several successful missions right within the belly of the beast.

His luck finally ran out. This involved what became known as the “Crocodile Gang”, when he and three other guerrillas were arrested in connection with the death of a white farmer. Two of his colleagues were hanged by the Rhodesian regime.

However, because he was not yet 21 years old, he was spared capital punishment and instead sentenced to 10 years behind bars. After serving his sentence, Mnangagwa was further detained in Harare along with Mugabe.

To this day, Mnangagwa publicly opposes the death penalty, despite it being in Zimbabwe’s statute book and his previously holding the post of justice minister.

Since 1980, Mnangagwa has held powerful posts in the government and party, but somehow always remained just outside the Presidium, despite repeatedly being touted as a potential state leader.

The major blight on his political career, though, according to his opponents and critics, came in the early 1980s, when he was state security minister during a rebellion in Matabeleland in the south-west where ZAPU fighters battled with the new national army over political differences with the government in Harare. It is said that Mnangagwa, as state security minister, presided over the death of thousands in the Matabeleland conflict.

Over recent years, Mnangagwa lost two parliamentary contests to a little-known opponent from the opposition MDC, but Mugabe never dropped him from the cabinet, signalling that he was not a man to be written off.

The Grace factor
But none of the good fortune that befell Mnangagwa in December would have happened the way it did were it not for one hitherto peripheral political player – the  First Lady, Grace Mugabe. After being nominated to lead the Women’s League of Zanu-PF, the First Lady began shaking up Zimbabwe’s political landscape four months ago, particularly when she embarked on a whirlwind countrywide tour, on which she relentlessly heaped all manner of allegations on Mujuru. President Mugabe himself has also publicly talked about the allegations, saying at one point that were the former VP’s sins to be written down, “they would fill volumes of books!” 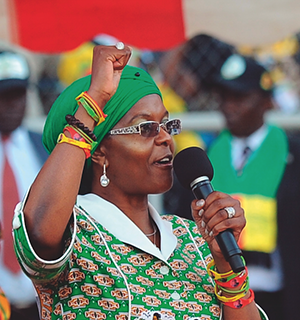 But Mrs Mugabe’s countrywide campaign and “exposure” of Mujuru’s “sins” drove the final nail into the former VP’s political career – at least within Zanu-PF. What she will decide to do next is not yet clear. And she was not the only senior party official who was given the boot. Seven senior ministers and a deputy minister linked to her were sacked on the same day, as well as a raft of mid-level officials.

While popular opinion has been that the First Lady deliberately set about paving the way for Mnangagwa to fill Mugabe’s boots after the 90-year-old president leaves office, some party insiders beg to differ.

“People who say that Amai Mugabe is pro-Mnangagwa have turned things on their head,” said a senior Zanu-PF official who sought to have his name withheld.

“Mnangagwa himself is pro-Mugabe and would never do anything to undermine the president. They have been together for a long time and he has learnt much from the president. So his rise to vice president is more a consequence of his loyalty and ability rather than any favouritism whatsoever,” he added.

What comes next?
The big question for many people is, what does this all mean for a country that has been through so much in its recent history, particularly on the economic and foreign policy fronts? Does having Mnangagwa as the number two – and conceivably as number one someday – mean any change in trajectory?

Ed Cropley, writing for Reuters soon after Mujuru was dismissed (“With or without Mugabe, Zimbabwe is still hostage to nationalism”, was his headline), believes that the new team spells disaster for Zimbabwe as policy will not change.
Conversely, it appears that Mnangagwa and the others have risen specifically for that purpose: to ensure continuity in the Zanu-PF party and government.

Mnangagwa himself told the party congress that Zimbabweans “will remain forever masters of [their] own destiny”, an apparent reference to the country’s economic empowerment and indigenisation policies.

This is hardly surprising as Mnangagwa was a key player in the early 1990s policy lobby, the Indigenous Business Development Centre – and this was some 15 years before the government formally adopted its empowerment and indigenisation policies.

Dr Qubani Moyo, a public policy expert, adds that the new set-up “is a move aimed at ensuring there is more emphasis on focusing on policy implementation with tangible results… than sloganeering.”

For the fallen VP Mujuru, hers is a classic example of a bright political future thrown needlessly away. Despite her lack of formal education at independence in 1980, Mujuru was made a minister by Mugabe at the age of 24 (the youngest minister in the country) and he kept her in government for 34 continuous years thereafter.

After appointing her VP in 2004, Mugabe showed enough signs in the following 10 years that he wanted the country’s first female VP to take over from him on his retirement.

He encouraged her to go back to her studies and she enthusiastically took up the advice, completing her secondary and tertiary education (crowned with a recent PhD) while still serving as a cabinet minister and VP.

Hitherto highly regarded and valued by Mugabe (who says his wife Grace was instrumental among the women’s voices that led to Mujuru’s appointment as VP in 2004), many ordinary Zimbabweans believe Mujuru’s downfall came about as a result of biting the proverbial hand that fed her.