The streets of Masaki, Dar es Salaam, are quiet on a Sunday. The palm trees line the wide roads, and in Oyster Bay, people watch the sun go down over a calm Indian ocean.

In Temeke district, 15km away from the peninsula and just across Selandar Bridge, the story is very different.

The markets are bustling and the streets dusty. In certain districts of Dar es Salaam like Temeke, the city is never quiet, as Tanzania’s informal workers hustle every day to make their living.

Dar es Salaam, a once sleepy fishing village, has been transformed into the country’s most populous city and the main financial hub. Today it is one of the fastest growing cities in the world, with projections that it will grow from 6m people today to 13.4m by 2035.

A border away, the “Green City in the Sun” sits auspiciously as the capital of Kenya, East Africa’s economic giant.

With a population that has doubled since 1986, Nairobi rouses each day with the blaring horns of activity hours before dawn. Mobs of people from all races, tribes and nationalities drudge through the city’s busy streets like a singular organic body.

They march through shops and farms and board rooms, mumbling into phones, shouting through bus windows and typing away furiously in air-conditioned offices, their lives intertwined, while the sun is up, by the “benevolent economy”.

In the evenings they retreat into their separate neighbourhoods. Some to the peaceful suburbs of Loresho and Gigiri, while others slip cautiously to their barely lit homes, a highway away in Kibagare.

Both Nairobi and Dar es Salaam retain deep-seated roots in their colonial histories. Raised under the Germans in Tanzania and the British in Kenya, Dar es Salaam and Nairobi show similar urban landscapes and a visible inequality that stems from their pasts.

For some, these cities provide a luxurious life of high-end restaurants and fancy apartments. However, for the majority, they are a daily struggle. Above: The city centre of Kenya’s capital, Nairobi, where wealthier Kenyans and expats can enjoy the high life. Below: The Kibera district in the city’s outskirts, said to be Africa’s largest urban slum. A colonial history of segregation

From 1896, the British colonial government shipped into Kenya indentured workers from India for the construction of the Uganda Railway. Subsequently, non-indentured Indian migrants also arrived on the promise of economic opportunities.

These labourers and migrants would add to the already existing Indian population residing in Kenya from centuries of trade with the Arab and Swahili peoples.

Nairobi, whose name comes from the Maasai phrase Enkare Nyirobi meaning ‘cool waters’,  grew from a rest stop for travelling nomads to a transport hub in 1899 after the construction of the railway.

Soon after, the British colonial government found that the area’s environmental conditions were suitable for European settlement. It was then in 1907 that Nairobi would come to replace the coastal town of Mombasa as the centre of colonial administration in Kenya.

“Colonisers viewed and legislated that colonial cities would remain ‘white cities,’ in the style of ‘European planning,’” says Amina Yasin, a Vancouver city planning commissioner.  “[They did this] while outlawing indigenous and communal land stewardship despite the majority of urbanites being indigenous Africans.”

The Nairobi Master Planners of 1948 included three White South Africans who were responsible for its structuring. The group comprised an architect, a civil engineer, and a sociologist, working to plan Nairobi along the lines of the latter country which was about to introduce the concept of Apartheid.

At the time, sociology was not a popular discipline, particularly in regards to urban planning. As such, Nairobi became among the first towns in history to employ sociology in its plans.

The reasoning behind this was to avoid the “sociological difficulties” caused by the “multi-racial urban area” that Nairobi would predictably become and by 1948, the burgeoning segregated town was home to about 100,000 Africans, Asians and Europeans.

“The intention of many East African cities has been to retain the segregationist race and class-based planning structures inherited from their colonial masters and their city master plans,” Yasin tells New African.

“This is especially discouraging to see across East African cities, as other cities especially across North America are being forced by public interventions to interrogate and redress these darker parts of their city histories,” she adds.

The initial vision for Nairobi was one of sprawling “estates, pleasantly spacious suburbs and plentiful public open space” where the European individual could excel with “ample room for sport” and leisure.

While this idea was being realised, and European and Asian populations were settling down into their new residences in Nairobi, the Kenyan tribes were being pushed out of their traditional homes.

This was due first to the railway that snaked across the country’s central region, then by the European settlers who were being generously granted plots of farming land by the British colonial government.

Another factor that contributed to this was that the employment of Kenyans within Nairobi was on temporary contract only, and as such permanent residences were not created to accommodate their rising populations.

“Indigenous Africans weren’t authorised to exist in the city outside of gendered temporary systems [that permitted] only African men in the city,” Yasin says.

This vision of Nairobi has carried on 58 years later.

“There’s a massive difference between the suburbs and the lower income areas,” says Doreen Muchiri, a chemist who has lived in the city her entire life.

Like Kenya’s capital, Dar es Salaam was divided into three zones by race, albeit discreetly. The camouflage in this instance was building restrictions.

Both the German and British colonial governments implemented building ordinances that divided the city based on the standard of construction within each area.

While nothing was said about the race of each zone, it created racial segregation. After Sultan Majid established Dar in 1862, the Germans took over in 1887, and published the first city master plan.

In this plan, Zone 1 along the waterfront would only allow European style buildings, Zone 2 around Mnazi Moja permitted smaller stone structures, keeping with an Indian and Arab style, and Zone 3 by Kariakoo was dedicated to temporary housing.

These ordinances created a racial divide between Europeans, Indians and Arabs, and Africans and when the British took over after World War I, these divisions began to deepen, according to Gwamaka Lucas, a former tour guide of Dar es Salaam Architectural History and Culture (DARCH).

“With the expansion of the government, the British needed more areas to live. They built the Selander Bridge and started to construct in other parts of the city,” Lucas says.

“They went to Oyster Bay, the peninsula area, and invested a lot of money there. In this zone, only Europeans could build. Africans would come and work but by 6pm, no African could pass Haile Selassie Road.”

Racial division was not the sole problem that arose with the creation of these zones, there were stark economic and social inequalities as well which continue to this day.

“You can feel like you are in a different city,” Lucas says about the difference in the zones.

“In Masaki and Msasani, you see they are planned well. The houses are big, the roads are tarmacked, and access to basic services like piped water is not an issue. But if you visit places like Mbagala, the infrastructure is poor. There is not even a sewer network.” 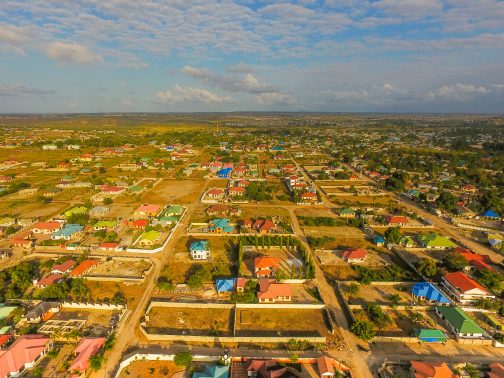 Lilian Magari, 29, a Tanzanian who resides in Masaki, says that the geography of the city ensures racism. “It has a direct impact on race relations. By the peninsula and around Upanga, all facilities are better – healthcare, infrastructure and even education. Europeans and Indians typically have better access to these areas, so it builds in the systemic racism that continues to exist today.”

As a Tanzanian, she said it is saddening to see the divide: “The hands that built this city are the ones being denied access to it. You have many Tanzanians working in Masaki, but when the sun starts to go down, they are almost forced to leave the city they have built. Many people who work in the service industry in Masaki are living far away.”

Kenya and Tanzania gained their independence from the British in the 1960s. While these two countries have undergone different trajectories of development, they are both still struggling to transform their main cities’ urban landscapes.

In Nairobi, there have been no tangible efforts by the administrators to create an integrated society.

During the colonial era, the African population which comprised the city’s lower classes were heavily taxed by the British but would rarely, if ever, see these funds used to raise their standards of living.

In modern Kenya, these principles of taxation and exploitation are still being applied.

“Taxes are imposed unequally across the board so that those who earn less pay more,” says Shadrack Kiprono, a banking analyst in Nairobi. “An average of 20% to 30% of Kenyan’s salaries are taxed, regardless of their income bracket.”

During the colonial era, the government “saw it fair to allocate five-sixths” of the public funds available for the construction of roads to the areas where Europeans lived. Taxes were also used to facilitate European government schools, parks and hospitals.

“Look at tea, for example. The best grade tea grown in Kenya is shipped to England, where it is manufactured and then sold back to Kenyans in local supermarkets at almost five times the price. Western capitalism exploits African countries for its own benefit but the benefit does not trickle back,” Kiprono says.

Today, Nairobi has been experiencing massive growth in infrastructure and boasts better transport systems than its East African neighbours.

However, these superficial improvements have been used as an excuse for the higher taxes; and high unemployment rates ensure social and economic gaps keep widening, with roots in the colonial spread of the city.

“East African cities need to radically reimagine for whom cities are meant. Is Nairobi, for example, still a colonial city? Is it still a ‘Green City in the Sun,’ or has it lost that title?” Yasin asks.

Dar es Salaam is in a somewhat similar position. After independence, while some investment has driven the renovation of some of Dar’s poorest neighbourhoods, the areas still lag behind the former European and Indian areas.

“The current situation is creating a lot of racial bias,” Lucas says. “Every time you go to these areas which are well planned, and you see most of the Europeans are in the area or Indians, it builds a notion and perception that they are also better. We need to start changing that narrative.”

A city planner, based in Dar es Salaam, who wishes to remain anonymous, also believes that this is a matter of politics.

“Most government officials live in these areas on the peninsula that are well developed. There is some corruption – development is pushed more to the places where they are living and building houses.”

This has meant that the rapid growth Dar es Salaam has seen has created higher levels of urban poverty, as migrants to the city are forced to live in the unplanned settlements due to high prices and tight building restrictions in the former Zones 1 and 2.

The result? Three-quarters of the population currently reside in informal settlements.

Blink and you will miss it – the development of Dar es Salaam is happening rapidly.

Now, a rising middle class with disposable income has created new hotspots in the city that are not just residential, but also commercial.

Posta and Masaki, the former expat regions, no longer host the city’s biggest shopping centres and restaurants. They are now starting to be found in Mikocheni, Kawe, Mbezi, Sinza and Kigamboni.

“With a growing middle class, other areas in Tanzania are becoming affluent and desirable to live in,” she says. “But we can’t make the same mistakes with old Dar es Salaam; the new areas must be more inclusive.”