Michael Renouf reviews 10 African films currently streaming on Netflix. These are just a few from a catalogue of excellent films.

February 2020 saw history being made with Netflix’s first script-to-screen African Original Series, Queen Sono. Created by actor, filmmaker, writer and comedian  Kagiso Lediga, who also co-directed alongside TV director Tebogo Malope, this six-part series showcases how well African filmmakers can rise to the challenge of producing glossy global entertainment, when there is a realistic budget.

A rollercoaster spy action thriller on South African terms, with a splash of family drama and intrigue thrown in for good measure, Queen Sono tells the story of an espionage heroine dedicated to protecting the African continent.

Upon learning of mysterious circumstances surrounding the assassination of her rebel mother, things take a deadly turn.

Filming took place across 37 different locations in Johannesburg, as well as Nairobi, Lagos, Zanzibar and Tanzania, so it is almost worth watching for the thrilling pan-African backdrop alone.

If you enjoy fast-paced action with lots of twists and turns, Queen Sono could well turn out to be your own binge-watch of the week.

You would not want your wedding day to turn out like this but if you are looking for some light-hearted entertainment, this romantic, colourful comedy drama delivers.

Dunni Coker (Adesua Etomi) is getting ready to marry Dozie (singer Banky Wellington in his acting debut), a reformed playboy from a wealthy but somewhat malfunctioning family. What could possibly go wrong? 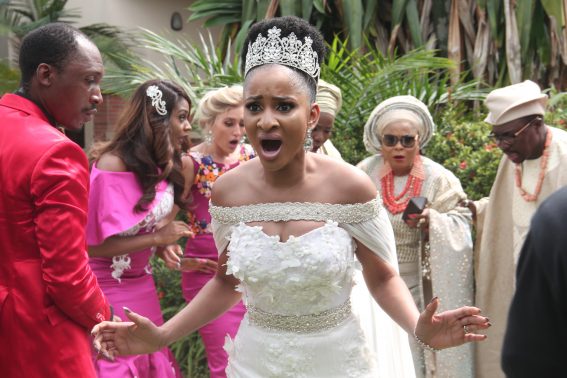 For those familiar with a Nigerian wedding, director Kemi Adetiba has successfully transported all the flamboyancy and exuberance to the silver screen, even managing a gentle poke at Nigerian tribalism (Dunni’s family are Yoruba and Dozie’s Igbo).

Meet the handsome groom and his posse, who both help and hinder the big day, the beautiful bride purging manipulative ex-girlfriends, sparring families, unwanted guests and an overwrought wedding planner (who I thought, slightly overplayed the part) and this is all before they say, ‘I do’!

This is the first feature film from Kemi Adetiba (who previously directed TV and music videos) but the fun, well-choreographed scenes show her earlier experiences have paid off. A night in, a glass or cup of the good stuff, the Wedding Party – enjoy!

The Queen of Katwe

Chess can take you from the humblest beginnings to the most grandiose venues; this is one such tale. Based on Tim Crothers’ book, The Queen of Katwe: A Story of Life, Chess and One Extraordinary Girl’s Dream of Becoming a Grandmaster, it is the remarkable true story of Phiona Mutesi (Madina Nalwanga). The youngster is just one of a plethora of actors making their acting debuts as the filmmakers decided to go with a largely unknown cast.

Phiona grew up in Katwe, a slum in Kampala, Uganda, but thanks to her natural talent and the two guiding lights in her life, her mother (Lupita Nyong’o) and her coach/mentor Robert Katende (David Oyelowo), she fulfils her potential. 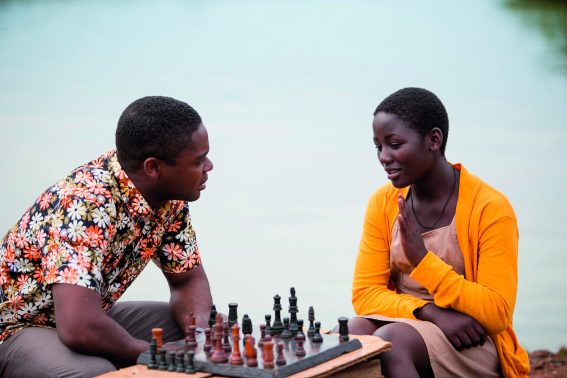 Although at times her mother seems to be an obstacle, she is trying to bestow the only things she has upon her children – her principals and morals.

This is as much a story about the mentor as it is about the pupil. One day Phiona follows her brother through the door of a hut where Robert is teaching the ancient game and is immediately enraptured. Year by year we see Phiona’s progress and how the lessons and strategies learned on the board can help in real life, as she works towards her goals and slowly realises her dreams.

The Boy Who Harnessed the Wind

This is the inspiring story of William Kamkwamba (Maxwell Simba), who is a young teenager when a terrible drought strikes, leaving his village on the edge of starvation.

A natural at engineering, with a curiosity for how things work, by luck William stumbles onto some information that allows him access to the school library. With his newly acquired knowledge he is convinced he can build a wind-generated dynamo that will bring sufficient water to the surface to save the crops. 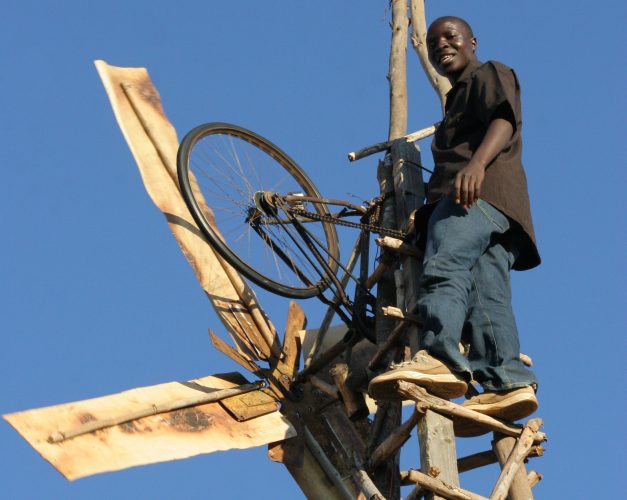 The story is based on the book of the film’s title, written by William himself along with Bryan Mealer, and is told in a mix of English and the Malawian dialect of Chicewan along with English subtitles.

It expertly captures the different outlooks of varying generations on how to solve the same problem as William and his father Trywell (Ejiofor) clash on how to best move forward. This entertaining and uplifting film was set and shot in Malawi, using many first-time actors.

If you start watching this documentary expecting to see a tale of how the park’s brave rangers protect the mountain gorillas and how this could have been a catalyst for growth in the region, that is the film director Orlando Von Einsiedel intended to make.

However, a new conflict between the rebel group M23 and government forces, alongside the intervention of British mining company, Soco International, looking for oil, changes the direction of this captivating film. 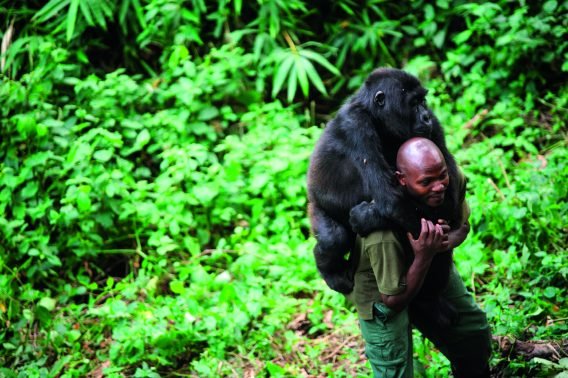 The Congolese National Park of Virunga (Africa’s oldest one) is a UNESCO world heritage site but despite this, mining rights were granted to the interlopers that would directly threaten the habitat of the mountain gorillas.

We observe how the rangers – a great number of whom have lost their lives (sadly another six in January this year) – try their best under the stoic leadership of Emmanuel de Merode, who many with greed in their eyes have seen as a roadblock to their ambitions.

Simultaneously, the documentary follows French investigative journalist Melanie Gouby, as she tries to expose Soco. This Oscar-nominated documentary finishes with the inevitable denials of wrongdoing from the company.

Beasts of No Nation

Shot in Ghana, this harrowing movie set in an unnamed African country shines an all-too-real light on something that far too many people on the continent have first-hand experience of: civil war.

Agu (superbly played by newcomer Abraham Attah) is a cheeky young boy who lives with his family in a buffer zone, but when the village gets wind of an imminent threat to their relative safety, they decide to send the women and younger children away; however, due to circumstances out of his control, Agu stays. 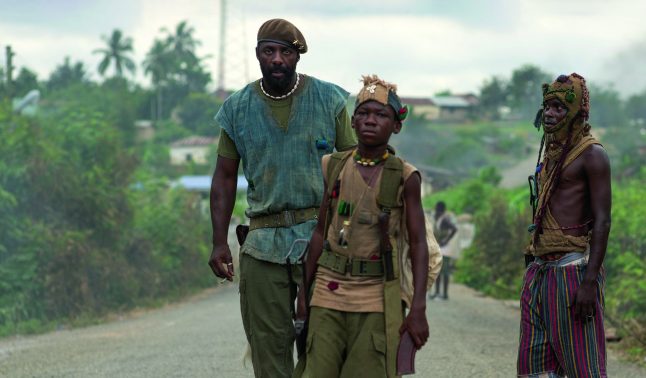 After the army decide he and his companions are rebels, a massacre ensues, Agu flees and he is ‘rescued’ by Idris Elba, who received a Golden Globe nomination for his menacing yet benevolent portrayal as the Commandant.

Given no real choice if he wants to survive, our young protagonist becomes a child soldier and befriends Strika (Emmanuel Nii Adom Quaye), who demonstrates that we communicate with far more than words.

Netflix’s first original movie – inspired by Uzodinma Iweala’s book – highlights that while child soldiers rob others of livelihoods, land and life, they themselves are cheated of innocence, freedom and so much more.

Partly based on a true story, which shocked when printed in 2014, this unflinching drama directs a full beam onto one of Nigeria’s darkest trades – sex trafficking.

Nollywood actress, Sharon Ooja raises her game several notches with her gripping portrayal of a naïve young journalist who goes undercover in a dangerous world to get her story.

Director Kenneth Gyang, along with one of his producers, spoke to sex workers and visited the places they worked to fully understand what they needed to portray, even using some of these real locations in the film, to excellent effect. 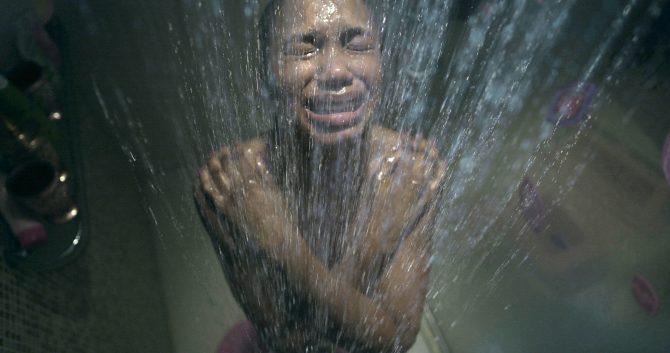 A special mention for up-and-coming actress, Omowunmi Dada (Linda), playing a professional ‘ashawo’ (prostitute), whose exceptional performance is a definitive part of the film’s success.

Premiered by Netflix as part of their partnership with celebrated producer, Mo Abudu and her production company – EbonyLife – this movie is an excellent example of Nollywood’s professional development into quality, introspective filmmaking about local stories that will resonate globally.

Filmed on a meagre budget in the final months of Robert Mugabe’s reign, this charming romcom stars writer/director Tomas Brickhill in the first Zimbabwean movie to stream on Netflix.

It opens with young Tapiwa timing his mother’s cooking – which seems a little precocious, until you realise, he is preparing the heroine of this Cinderella-like tale to take part in the real-life reality cooking programme, ‘Battle of the Chefs’. 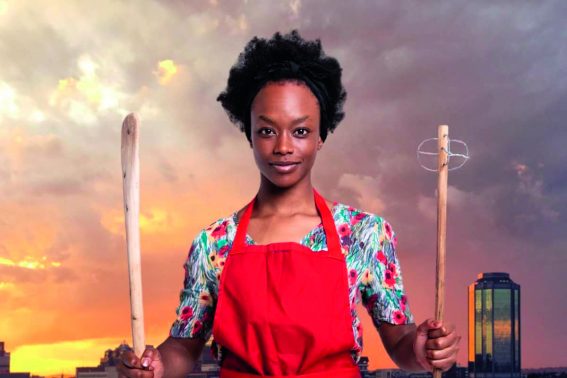 Anesu (Tendaiishe Chitima) is a fantastic cook but with a critical mother, sometimes lacks confidence; however, her son and grandmother believe in her. When she gets to the show, we have what any director of a reality programme prays for: rivalry, devious characters, allegations of cheating and a blossoming love story. A few real-life singers pop up including Tehn Diamond (Prince), who also contributed several songs to the film’s soundtrack.

I challenge anybody coming away from this powerful, thought-provoking film, based on the book Colour Bar: The Triumph of Seretse Khama and his Nation, not to be equal parts inspired yet frustrated.

Many mixed-race couples have faced opposition from family, friends and even strangers but Seretse Khama and Ruth Williams had to face not only this but the disapproval of the British government plus many others. 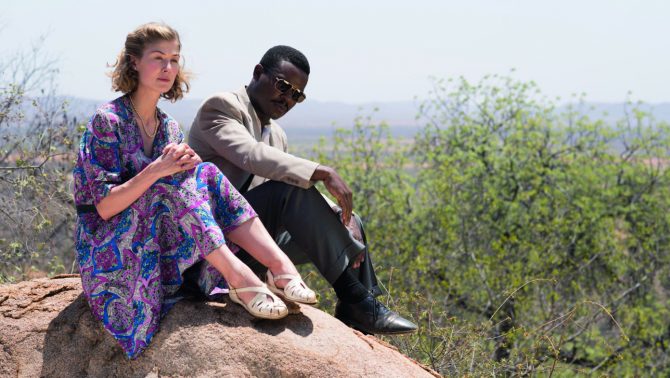 In this true-life tale, the couple superbly depicted by David Oyelowo and Rosamund Pike fall in love in Britain before moving to Seretse’s native Bechuanaland, a British protectorate, which unleashes a diplomatic firestorm. For you see, Seretse is being prepared to be king and ruler of his country and the couple not only face opposition from the British, but also the neighbouring South Africans. They recently implemented apartheid and Britain, recovering from World War Two, relies on them heavily for gold and uranium. There is even internal strife with his own uncle – the regent. Will right prevail?

This 1958 offering from director Youssef Chahine made during the golden age of Egyptian cinema was Egypt’s first-ever entry for the Best Foreign Language Film at the Oscars.

The black and white tale, told in Arabic with English subtitles, tells the story of a lame and simple boy, Qinawi, played by Chahine himself, who sells newspapers for the kind-hearted Madbouli.

Qinawi becomes enamoured with one of the illegal bottle-sellers, Hanuma, portrayed by Hind Rostom, whose blonde hair, good looks and bubbly personality led to her being dubbed the ‘Marilyn Monroe of the East’.

She is set to marry Abu Siri (Farid Shawqi), a strong and respected porter, who is hoping to unionise his colleagues, yet Qinawi decides nothing is going to stop him and he purchases a knife, prepared to take whatever steps are necessary to be with his unrequited love. Filmed on location at Ramses Railway Station in Cairo, this movie feels positively like one made by the British master of suspense, Alfred Hitchcock.

Read our exclusive interview with Ben Amadasun, Netflix Director of Content for Africa