Cameroon: All Africa in one country

It is all too easy to depict Cameroon’s Anglo-Francophone division as a weakness, both because of the conflict that it has engendered and the negative impact that it has had on national cohesion. Yet it has the potential to become a real strength

Cameroon is often described as ‘Africa in miniature’ because of the wide range of different landscapes, languages and ethnicities. Such differences can and do pose challenges to national unity but also create a rich tapestry of varied cultures that have the potential to become a strength in the longer term if properly utilised.

The population of Cameroon is concentrated in and around Douala and Yaoundé, although the Far North is the most populous region and about a fifth of the population lives in the two Anglophone regions. Douala is the most economically dominant city in the country and has a population of 3.3m, ahead of the capital, Yaoundé, with 2.5m.

It is difficult to obtain exact figures by ethnic group, not least because many people do not fall neatly into one specific group. However, roughly speaking, one of West Africa’s biggest groups – the Fulani – who live in the north, comprise about 10% of the population and the Kirdi of northwest Cameroon 11%, both just behind the Bamiléké, who live north of Douala and Mount Cameroon, with 12%.

Cameroon is one of the most linguistically and ethnically diverse countries in Africa, with more than 200 languages or at least fairly distinct dialects, including Niger-Congo, Afro-Asiatic and Nilo-Saharan languages.

While much is made of the split between French and English-speaking Cameroon, it is important to emphasise the importance of African languages. Indeed, roughly a quarter of the entire population does not speak either English or French.

Fulfulde and Hausa speakers dominate the north, while Fang-speaking people stretch from the south of Cameroon over the border into Equatorial Guinea and Gabon. Other African languages include Fula, Vengo, Mundang and Gyele.

Apart from English and French, pidgin is a popular lingua franca among both Anglophone and Francophone Cameroonians in the south. A new form of pidgin, called Francanglais, which combines French, English and Creole, has become increasingly popular among young people over the past 20 years. Ewondo is the main lingua franca in the centre and east of the country, with Fulfulde playing the same role in the north. 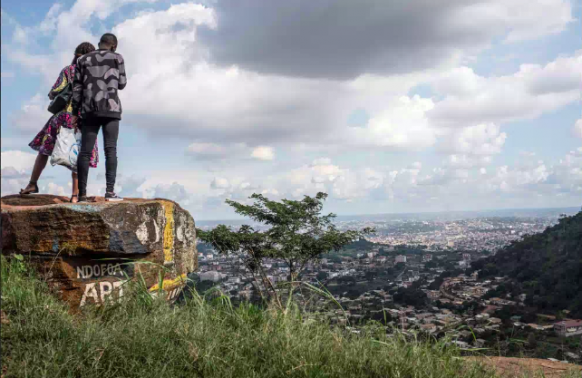 A couple admire the view of Yaoundé, the capital of Cameroon.

One aspect of Cameroon’s diversity is currently providing the biggest threat to national stability: the sharp division between the French and English-speaking parts of the population. The country was a federation of the two until 1972, when the regional assemblies of east and west Cameroon were abolished. The Anglophone regions complained that they had gradually lost most of their remaining autonomy, including rights to their own police force and judiciary.

Many English speakers have long complained that they have been marginalised by the French-speaking majority but the level of agitation for greater autonomy or even outright independence has fluctuated widely. The current conflict appears to have been driven by the 2016 protests by Anglophone teachers and lawyers over the level of central government control, with some protesters killed by the security forces.

A range of different armed groups were set up, with some launching attacks on government military posts in the two Anglophone regions – Northwest and Southwest – from late 2017, while there have been some kidnappings. The government rejected an appeal for a return to a federal system but this seems to have merely encouraged more Anglophones to favour full independence.

There are a variety of different armed groups fighting the army and their motives may vary but many come under the umbrella of the Contender Forces of Ambazonia, who are fighting to create an independent state that they have named Ambazonia.

Rebels fired on an Cameroon Airlines plane as it prepared to land in Bamenda last November. There were no casualties, although there was some damage to the plane. Cho Ayaba, the president of the Ambazonian Council, said that the plane was targeted because civilian aircraft were being used to transport soldiers and military equipment.

The chairman of the opposition Social Democratic Front (SDF), John Fru Ndi, who is one of the most prominent Anglophone leaders, said in 2019 that he was not a separatist but that the government was pushing him in that direction. His movement actually managed to gain some support in parts of Francophone Cameroon in the late 1990s and helped move Anglophone sentiment away from secession but the argument seems to have moved on since then.

According to the World Bank, more than half a million people have been displaced by the fighting, both internally and over the border into Nigeria because of the conflict. This is in addition to the 400,000 refugees from other countries that the United Nations High Commissioner for Refugees calculates are living in Cameroon. Estimates of the number of fatalities vary considerably, but the United Nations puts the figure at 2,000.

The government organised peace talks in October but separatist groups – both armed and political – refused to take part until the army had withdrawn from the Anglophone regions and released all prisoners, while they also called for international arbitration. Biya ended legal action against 333 people in October but the Anglophone opposition says that about 5,000 people have been imprisoned since 2016.

Nevertheless, the talks resulted in parliament, in December, offering to give the Northwest and Southwest regions greater autonomy, including in education and the judiciary, in order to diffuse tensions. The government said that they would “benefit from a special status founded on their linguistic particularity and historic heritage”.

The best method of calming tensions appears to be for the government to make concessions, including perhaps the reintroduction of a federal system, in order to strengthen national unity. The firmer the line they take, the more Anglophone Cameroonians seem to favour independence. Whatever the outcome, it is to be hoped that the conflict is resolved peacefully.

It is all too easy to depict the Anglo-Francophone division as a weakness and indeed it has largely been a drawback to date, both because of the conflict that it has engendered and the negative impact that it has had on national cohesion.

Yet it has the potential to become a real strength. A more varied colonial experience and the bilingual skills that it has brought could give Cameroon an advantage in attracting investors keen to target both English and French-speaking markets.

Broadly speaking, the population is often considered to be 40% Christian, 40% animist and 20% Muslim, although in practice many people combine animist and Christian beliefs.

With both large Christian and Muslim populations, Cameroon enjoys holidays and festivals from both traditions. It has the same religious structure as much of West Africa, with Muslims mainly in the north and Christians concentrated in the south. Most French-speaking Christians are Catholic, while Anglophone Cameroonians tend to be Protestant.

Cameroon’s varied history has created a wide range of architecture. As in much of Africa, there is a big contrast between colonial-style buildings, such as the Palais des Rois Bell in Douala from the German period, with its many courtyards; traditional African buildings; and more modern constructions.

Mention Cameroon to many people around the world and the first thing they will think of is football. The national team – nicknamed Les Lions Indomptables or the Indomitable Lions – has won the Africa Cup of Nations five times and played in the World Cup on seven occasions.

They are one of the three best performing African teams at the latter tournament, reaching the World Cup quarter-final in 1990, when Roger Milla stunned the world by scoring four goals at the age of 38. He also became the oldest-ever goal scorer in a World Cup, when he netted against Russia four years later. Since then, dozens of Cameroonians have played in the biggest European leagues, including Samuel Eto’o, Patrick M’Boma and Thomas N’Kono.

All this variety, coupled with the country’s stunning natural attractions, could have economic benefits in the form of tourism. Although the sector is currently relatively limited in scale, by global standards, many of the ingredients are in place to attract visitors from around the world. It has year-round warm weather, although most visitors would choose to avoid the various rainy seasons. There are excellent beaches, including the famous black sand beaches at Limbe, and warm seas.

There are forests, mountains, savannah and even Sahelian ecological zones in the far north. Mount Cameroon and other upland areas offer excellent hiking, with a variety of ecological zones at different altitudes and a range of spectacular rivers, waterfalls and caves. The Chutes d’Ekom Nkam, or Ekom Falls, have featured in several films, while the Chutes de la Lobé pour directly into the Atlantic Ocean.

West and Central Africa attract just a fraction of the visitors of East or Southern Africa but a forest safari would make an excellent alternative to the more well-trodden paths in Kenya or Tanzania.

Lowland gorillas and forest elephants are among the attractions, while there are also numerous rare flowers and birds. Some tea and coffee estates already offer tours, including around Buea in the Southwest. However, the ongoing conflict in the Anglophone regions and the far north currently put some areas off-limits, while also affecting international perceptions of the country.

Conflict in the north

Aside from the rebellion in the Anglophone regions, Cameroon is experiencing conflict in the north, in the form of Boko Haram. Although the jihadist  insurgency has been most associated with Nigeria since it emerged in 2009, it has affected the entire Lake Chad Basin, including Cameroon, Chad and Niger.

Coordinated military action by the four states involved has managed to restrict the militants’ territorial aspirations, including in May 2014, when Cameroon deployed 1,000 troops in the campaign. President Paul Biya announced in January 2019 that the group had been pushed out of Cameroon but this does not seem to have been borne out. It is proving to be remarkably resilient.

Research by Amnesty International that was published in December found that at least 275 people had been killed by Boko Haram in Cameroon’s far north in 2019, including 225 civilians, with many more injured or kidnapped and houses burnt down.

It seems that only long-term cooperation by the four countries can tackle the problem as Boko Haram is currently able to move back and forth across all too porous borders. Moreover, more effort needs to be put into improving living standards and promoting economic growth in what is one of the most underdeveloped parts of West Africa.

Read more from our special report on Cameroon

Cameroon: the beating heart of Africa

This report was supported by Stratline Communications and Invest Cameroon. The editorial was commissioned separately and produced independently.