If you want to fully appreciate the scale of any Nigerian phenomenon, it needs to be looked at through the prism of gender. And the test case for this is poverty and how women are treated. Onyedimmakachukwu Obiukwu writes from Africa’s most populous country.

According to the World Poverty Clock, the number of Nigerians who are extremely poor – those living on under $1.90 a day –  is now 94m and rising, making the country the poverty capital of the world. Startling as this data may be, the true scale of the problem of poverty in Nigeria only becomes more apparent when you consider the fact that women, who make up slightly less than 50% of Nigeria’s population, account for more than 70% of those in extreme poverty.

Hence, poverty is a gender issue. So too are the massive inequalities spiralling out of control – across wealth, health and every other socio-political determinant in Nigeria. Recognising the centrality of gender to these issues is not only critical to fully appreciating the scale of the challenges, it is the most effective route to achieving shared progress and prosperity in Africa’s most populous country.

When you look at the 17 action points of the Sustainable Development Goals, which is the most comprehensive global roadmap to shared human progress, it is impossible to overlook the centrality of its call for gender equality and reducing inequalities. Indeed, it is improbable that the world could attain significant success in almost any action area of the SDGs – from ensuring quality health care, education and sanitation for all to reducing poverty, ending hunger, providing productive employment or enabling strong institutions – without achieving strongly in gender equality and reducing inequalities.

This is even more true for Nigeria, where the gender bias is not only keeping women down, but also restraining the country from nearing its massive potential. Nigeria’s gross domestic product (GDP) could grow by 23% – or $229bn – by 2025 if women participated in the economy to the same extent as men, says a McKinsey report. Forty per cent of girls are out of school in Nigeria, according to the UNESCO Institute for Statistics, and even those who make it into school have an average school life expectancy of 9 years, as against 17 years in the developed world.

In health care, Nigerian women are heavily short-changed in their reproductive rights, and they suffer one of the highest maternal mortality rates in the world.

In finance, nearly 7 in 10 women are unbanked, with more than half of them financially excluded. And across the legal institutions and family structures, socio-cultural determinants continue to lead to the treatment of women as being inferior to their male counterparts.

The great thing is, Nigerian girls and women are already excelling in all of these areas, demonstrating how they can be the springboard Nigeria needs to fulfil its socioeconomic potential.

In the most recent West African Senior School Certificate Examination in Nigeria, 50.23% of the candidates who got 5 credits inclusive of English and Mathematics were female, even though girls made up just 48.30% of the total number of candidates.

Women are also at the forefront of health and social care initiatives in the country, starting and running more care-focused NGOs than men. They are also dominating the entrepreneurial space.

A BBC report states that 40% of Nigerian women are entrepreneurs, which is the highest ratio of female business owners in the world. Driven, innovative and passionate about uplifting themselves and others around them, Nigerian women are also running more formal businesses, leveraging technological advancements to build innovative companies and organising more than ever to support each other.

All that the women in Africa’s most populous country need now, is a society that is more supportive and less discriminatory in how it treats and caters to their wellbeing, goals and aspirations. And it would take a sustained focus and commitment from both the public and private sectors to bring that about.

Working together for gender equality

When the public and private sectors work together for a cause, change happens. The most recent evidence of this is Nigeria’s eradication of polio. While it may have taken more than three decades of sustained effort and over a billion dollars in what has been tagged “the largest global health intervention ever attempted”, the biggest lesson from Nigeria’s eventual eradication of the infectious incurable disease is the value of intra-institutional collaboration in facing up to any social issue.

McKinsey’s report on the polio eradication effort describes it as featuring a “War Room Approach”, whereby leaders of national and international organisations met regularly “to develop and execute eradication strategies, improve vaccination campaigns, and respond immediately to outbreaks”. The fight for gender equality requires a similar such effort; multidimensional, intersectional and long-term, but with a singular focus on uplifting all women in politics, in the workplace and across social strata.

Buhari and women in power

Nigerian politics is one of the areas in dire need of gender-focused inclusion. According to a feature on women in politics in Nigeria, published by UN Women just before the country’s 2019 elections, the country has one of the lowest rates of female representation in parliament across Africa. Globally, Nigeria ranks 181st out of 193 countries.

In the national polls held shortly after, only 5 out of 73 candidates running for President were women. Women comprised just 12% of the candidates for senatorial seats and were only 560 in number, as against 4139, in the race for places in the House of Representatives.

The results after the elections were even worse; only 62 women came out on top, constituting a meagre 4% of elected officials, according to the Centre for Democracy and Development (CDD).

In President Muhammadu Buhari’s new cabinet, only 7 women made the cut, making up a little above 16% of the federal ministers. For a country where more than 49% of the population, over 90m people, are women, such under-representation should trigger a concerted collaborative effort to correct matters.

But who can forget President Buhari’s 2017 chauvinistic gaffe – “I don’t know which party my wife belongs to, but she belongs to my kitchen and my living room and the other room” – which is perhaps  still one of the biggest public admissions of how little, if any, respect is placed on the political opinion and participation of women in leadership.

But the legacy of misogyny, chauvinism and suppression of the voice of women permeates human history. However, several countries in Africa have since taken remarkable steps to address gender imbalance. Unfortunately not Nigeria, where it is still a great privilege for millions of girl-children to access basic education, where underage marriage remains rampant and permitted under law, just as gender discrimination and domestic abuse hardly ever register any legal proceedings despite their pervasiveness. It is hard to imagine active political participation from such women.

At the moment, civil society groups are the frontbenchers in this cause, but only with greater commitment across every level of government and a sustained engagement with the public can anything change in this regard.

The tides are a bit fairer in Nigeria’s formal workplaces, but women still face torrential storms, especially with climbing the career ladder.

According to the National Bureau of Statistics, between 2010 and 2015, women made up 38% of the workforce of the states’ public service sectors, and 42% of those with federal employment.

While data on employment in the corporate sector is hard to come by, according to a 2016 survey conducted by DCSL Corporate Services Limited, between 2013 and 2015, women accounted for only 14% of the 915 board directors of the 132 companies quoted on the Nigerian Stock Exchange.

“Even though the number of women in the corporate sector has increased over time, they still face the proverbial glass ceiling as there is a paucity of women in senior executive positions and on company boards,” wrote Nwamaka Ogbonna on the London School of Economics blog site.

“In addition to this, most companies are unaware of the benefits of a gender- diverse board; research has shown that there is a positive correlation between women in senior corporate roles and a company’s financial performance.”

Hamad Buamim, former chairman of the board of Hawkamah Institute for Corporate Governance, agrees: “Businesses led by diverse boards that reflect the whole breadth of their stakeholders and their business environment will be more successful,” he is quoted in a report on Women on Boards in Nigeria from the International Finance Corporation. “They are more in touch with their customers’ demands, their investors’ expectations, and their staff’s concerns, and they have a forum in the boardroom where these different perspectives come together and successful business strategies can be devised.”

Ultimately, whether in the corporate sector, in politics, on health or across every other socio-economic structure, a more gender-equal Nigeria will create a more prosperous country.

It is not by coincidence that the countries that rank high in the human development index (Iceland, Norway, Sweden, Finland) directly correspond with the countries atop the gender equality’s list.

For Nigeria, struggling with stagnating economic growth, slow development, an unstable polity, falling standards of living and weak institutions, a heightened focus on addressing the intersectional gender imbalances that are a main feature of these problems may be the master key to unlocking the myriad of opportunities that the country possesses.

To put it simply, Africa’s most populous country could easily become Africa’s most prosperous, if it addresses the hurdles and hindrances that holds down roughly half of its people. 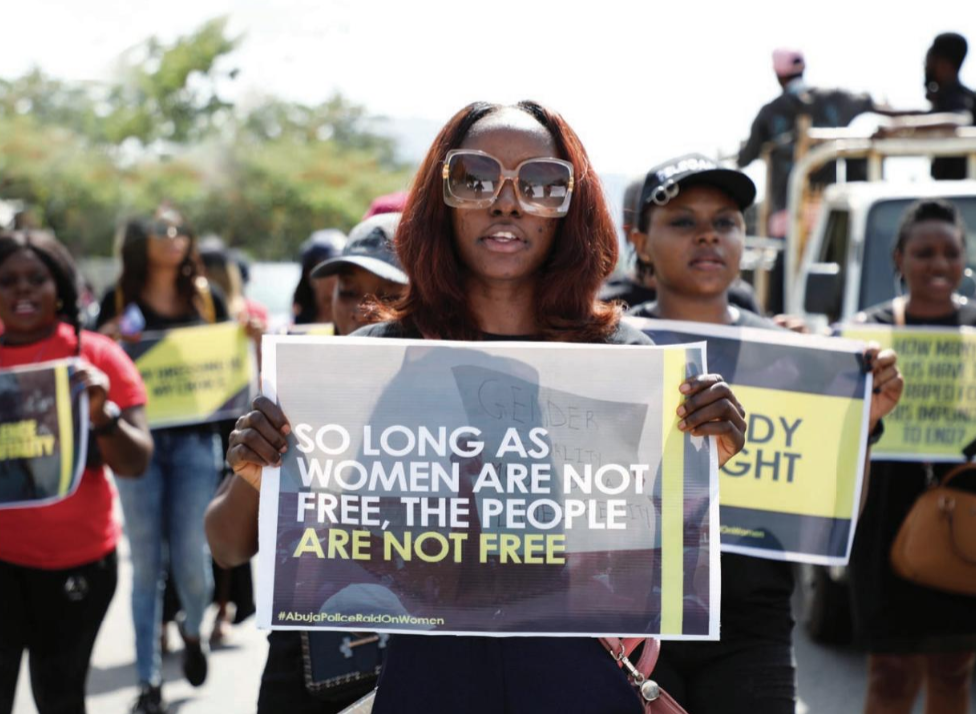