DRC: Is Felix Tshisekedi delivering on his election pledges?

Former President Kabila simply ignored the troubles in DRC, but current leader, Félix Tshisekedi has pledged to solve them. But is he? And what is he up against? Tom Collins analyses.

The Democratic Republic of Congo’s (DRC) eastern provinces have been racked by violence for decades as a bewildering array of armed groups engage in conflict, for all sorts of reasons.

And when Joseph Kabila’s 18-year-long stranglehold over the DRC was partially brought to an end by Félix Tshisekedi’s controversial ascent to office in January, many hoped the change of guard would signal a change of fortune for the war-torn country.

Arguably the most pressing issue is instability in North and South Kivu and Ituri Province, on the Lake Albert border with Uganda.

Amid the violence, Ebola has killed more than 1,600 people in less than one year and the deadly virus has been reported in the North Kivu capital of Goma, which operates as a major access point to East Africa.

Kabila was happy to leave the region largely ungoverned provided the numerous rebel groups were no threat to his power in the capital Kinshasa, 2,500km away.

The former President was even hesitant to combat the Rwanda backed M23 rebel group, which took control of Goma in 2013 and posed a serious threat to his rule.

Many now wonder whether Tshisekedi will bring a fresh approach or simply follow in his predecessor’s footsteps.

The new President has begun his first year in office by making big promises. As part of his election campaign, Tshisekedi promised to raise the average wage from $1.25 to $11.75 a day.

He also claims to have devised a plan for the “complete eradication” of more than 120 armed groups in the eastern provinces.

His first foray into the region involves sending the Armed Forces of the Democratic Republic of Congo (FADRC) into Ituri, which has experienced a flare-up of violence.

Experts, however, believe that Tshisekedi has neither the power nor ability to make any real change.

Since 10 June, more than 160 civilians have been killed in a longstanding conflict between Ituri’s Lendu farmers and Hema herders.

On a three-day visit, Tshisekedi described the violence, which has led to over 300,000 internally displaced persons (IDPs), as “attempted genocide”.

According to the United Nations, more than 60,000 people were killed and over half a million displaced as a result of inter-ethnic clashes between the two groups from 1999 to 2003.

As the humanitarian situation deteriorated, the French led a United Nations in the Democratic Republic of Congo (MONUC) force into the provincial capital of Bunia in 2003, which led to a cessation of violence.

When fighting resumed, the FADRC began large-scale counterattacks on militia between 2012 and 2014, which were again largely successful.

As Tshisekedi now sends the army back into the region, Jean-Mobert Senga, Amnesty International’s DRC researcher, argues that such a military-only approach does little to address the underlying causes of the conflict.

“Tshisekedi is taking exactly the same tactics without really addressing the causes of the conflict,” he says.

“The result will probably be another military victory over the armed groups which will lead to a fragile peace; it may last a few months or a few years, but the problem will still be there and it will still have to be addressed.”

Equally concerning is the recycled chain of military command that Tshisekedi is using.

Many of the higher-ranked figures have very bad track records in terms of human rights and collusion with armed groups in the region.

A powerful ally to the former President, Kumba has been sanctioned by the US and EU for human rights abuses along with being accused of profiteering from illegal mining, logging and arms trading.

Amnesty’s Senga says Tshisekedi’s plan is an “ad-hoc response to the violence” which foregoes any long-term strategy.

“It shows there is no clear assessment of the problem,” he says. “The actors are not serious so there is no serious plan.”

In terms of bringing peace to neighbouring provinces, Tshisekedi has so far given very few details and Senga believes the strategy will be much the same as in Ituri.

Other concerns include the Coalition Nationale du Peuple pour la Souveraineté du Congo (CNPSC), which started a smallscale insurgency in South Kivu in 2017.

Despite quickly overrunning army bases the group has since been contained by security forces.

Last year, they were responsible for attacking mines near the Maniema province border.

Off the battlefield, the Congolese warlord Bosco Ntaganda, known as the ‘Terminator’, has finally been convicted by the International Criminal Court (ICC) for crimes against humanity in Ituri between 2002 and 2003.

The Hague convicted Ntaganda of 13 counts of war crimes and five counts of crimes against humanity with charges including murder, rape, sexual slavery, intentionally directing attacks against civilians, ordering the displacement of the civilian population, and conscripting children into an armed group. 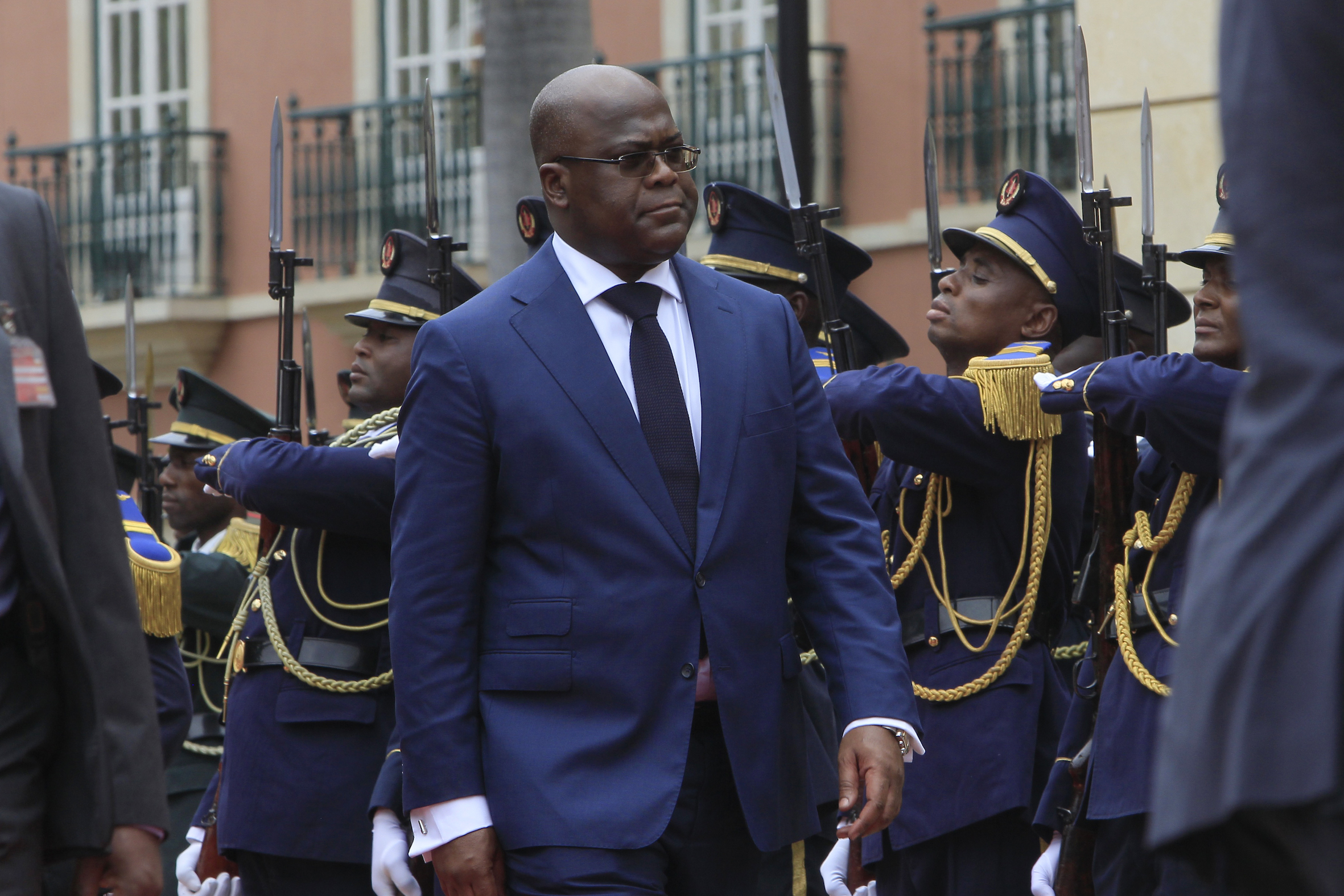 Yet Tshisekedi’s inability to bring a fresh face to Congo’s armed forces is not entirely driven by a lack of intent.

His ascendency was crafted in Kabila’s bosom as the pair rigged the election at the expense of another opposition candidate, Martin Fayulu who continues to organise large-scale protests across DRC.

Since then, Tshisekedi’s moves have been monitored at every turn by the former President, who continues to wield far greater clout than he does.

At the outset, Kabila’s coalition party, the Common Front for Congo (FCC), won 341 seats out of 500 in legislative elections held on the same day as the Presidential contest.

DRC’s national assembly is therefore dominated by Kabila and the constitution decrees that the President must choose a Prime Minister from within the FCC’s ranks.

Forming a government has presented huge initial problems for Tshisekedi, as he barters with his ‘landlord’ for autonomy.

Kabila had wanted to appoint his ally, Albert Yuma as Prime Minister but Tshisekedi refused due to his chequered reputation as former chairman of the state-owned mining company.

The former head of DRC’s national railway company, Sylvestre Ilunga Ilukamba, another of Kabila’s allies, was finally appointed after around four months of negotiations.

Indigo Ellis, Africa Analyst at Versik Maplecroft, a global risk and strategic consulting firm, says the “totality” of Kabila’s rule is such that Tshisekedi will struggle to make any reforms within the embedded security apparatus, which is key to finding a lasting solution in the eastern provinces.

“He won’t be able to enact the wide-ranging security reforms which would be necessary to have a serious impact on the eastern provinces,” she says.

“Ultimately he’s working with a security apparatus that is at the senior levels loyal to Kabila.”

Like General Kumba, many of these generals are stakeholders in eastern lawlessness – working with armed groups to profit from DRC’s natural resources.

Kabila co-opted many from the M23 rebellion into the Congolese army after the conflict, allowing the ex-insurgents to continue as they were in exchange for their allegiance.

With Kabila still in control, uprooting the army and this system of instability is far beyond Tshisekedi’s reach.

His one positive move, says Ellis, has been to form an alliance with Vital Kamerhe as his running mate and now chief of staff.

Kamerhe is a very powerful figure in South Kivu, which may grant the President a degree of influence.

One area where Tshisekedi has distinguished himself from his predecessor is regional politics.

Tshisekedi has sought a much closer alliance with his East African neighbours than Kabila, who mostly kept the eastern bloc at an arm’s length after the First and Second Congo War, which saw Uganda and Rwanda pitted against the regime in Kinshasa.

Mutual distrust was at its greatest between Kabila and Paul Kagame, despite the Rwandan President helping Kabila’s father, Laurent-Désiré Kabila, to depose the dictator Mobutu Sese-Soko from South Kivu with support from Uganda and Burundi in 1996.

After the wars in the Congo officially ended in 2003, Kagame was accused of seeking to continue to destabilise Kinshasa from Kigali; for instance by supporting the rebel M23 movement.

Tshisekedi has even formally applied to join the regional bloc, the East African Community (EAC).

Uganda and Rwanda are the two countries closest to DRC’s eastern provinces and hence greater cross-border collaboration could be an important turning point in the region’s fortunes if capitalised upon.

Yet it’s unclear whether greater collaboration with the other EAC member countries (Kenya, Tanzania and Burundi) will have a serious impact on the eastern region and whether even East Africa’s leaders are that concerned about neighbouring instability, despite security issues.

On the one hand, access to markets in eastern DRC is extremely difficult, considering the lack of decent infrastructure across most of the country and the fact that the country’s Atlantic Ocean coastline is around 3000km from Goma.

Exporting goods through the EAC, with the benefit of the regional bloc, would pay some economic dividends for the impoverished region which may in turn impact positively on the security situation.

However, Amnesty International’s Senga argues that Rwanda in particular may benefit from the instability in the area due to the type of products it currently exports to the region.

In the context of heavy militia presence, eastern DRC has to import basic goods such as milk, potatoes, wheat and beef, which mostly come from Rwanda.

If a lasting security fix was brought to the region, Rwanda, which is currently not trading with Uganda and Burundi due to a falling-out, may lose some of its competitive advantage with its biggest export market.

While Tshisekedi is keen to bring change to DRC’s troubled eastern region his ability to achieve just that is severely constrained due to a number of regional and political realities.