Thank you for your time Jean-Claude. Among much more, your passion for education, knowledge and innovation is very palpable and laudable. To begin with, what drives this passion?

I guess you could say that I’m driven to create. I’ve always been that way, pushing the envelope, defying norms and testing new ways to do things better and faster. In a way, the passion for innovation is in my blood. My grandfather invented the light feature in watches way back when Swiss-watch making was still a very traditional industry. I must have inherited some of his traits because I am drawn to disruptive ideas that shift mindsets and influence positive change

You are considered one of the Most Influential Africans- named so in the New African Top 100 in 2013- how do you measure the impact your influence has had in Africa, more so through AIF and IPA?

For me it’s not about measuring impact. I invest in Africa because I believe in Africa’s potential. I feel so grateful that I have a chance to contribute to the continent’s incredible growth story even if in small measures. But if I had to single out one example, the defining moment would be in 2012, when AIF awarded the inaugural Innovation Prize for Africa (IPA) during a joint conference by the African Union (AU) and United Nations Economic Commission for Africa (UNECA) in Addis Ababa. During that conference, African Ministers passed a resolution to support AIF in promoting innovation-based societies across the continent. Today, we have created a movement. We have the largest database of African innovators, over 6,000, and an expanded network of multi-sectoral audiences who are driving African innovation forward. Of course, there’s so much more to be done but it’s gratifying to see more and more African nations joining this movement for innovation-led growth.

While everyone agrees that innovation, more so homegrown innovation are key to Africa’s still fledgling development – the sector is one of the hardest to achieve on a broad and impactful level. What do you consider to be the worst hurdles affecting innovation in Africa today? What holds us back?

I think you’d be somewhat surprised if you scratched beneath the surface. There is an inherent innovation spirit that is stealthily fueling its way across the continent. And it’s not just a fad, it’s very real indeed. Despite the fact that we’re a continent made up of 54 countries, the one thing that is uniting Africans is this spirit. The continent is seeing a sharp rise in home-grown innovative solutions (as reflected in initiatives like IPA) across the agriculture, healthcare, environment, transportation and technology spectrum. African innovation enablers and influencers are breaking down barriers and encouraging regional collaborations to steer African innovation forward through infrastructure development, technology transfer and critical know-how. I believe that it’s only a matter of time before the global investment community realizes and descends upon the potential of innovation from Africa.

That said, let us look into the area of Agriculture for example, which is extremely crucial to Africa’s development and food security, and hence innovative ways of scaling up this sector are key. In the same vein, agriculture in Africa is largely female-led, yet this is the demographic that is inarguably at the bottom rung in terms of educating girls and women in innovation and technology. Girls are still largely encouraged to take up domestic/social subjects as opposed to sciences or STEMs – which are mainly linked to innovation. Does the AIF have some deliberate policies to help encourage girls and women into sciences, tech and innovation?

AIF isn’t in the policy-making space but we do of course try to strategically influence policy through our flagship programs such as IPA. While IPA applications from female innovators have remained below 20 percent, we know they’re out there. We know they’re fronting incredible innovations that solve African-specific challenges. Last year, one of the second prize winners was a young South African woman, Imogen Wright, who invented a software solution that enables healthcare workers to determine HIV positive patients’ responsiveness to ARV drug treatment. In 2015, another South African woman, Prof. Lesley Erica Scott, won second prize for her invention that examines the accuracy of machines used to TB detect and diagnoses.

For IPA 2017, which will be held in Ghana this July, AIF under the patronage of the First Lady of Ghana, Mrs Rebecca Akufo-Addo, will introduce a workshop aimed at nurturing and encouraging a vibrant ecosystem of women innovators across Africa. As women are crucial to the overall prosperity of the continent, we need to step up efforts to mobilize key enablers across the innovation, education and business spectrums to catalyze female innovators in Africa.

It’s the 6th IPA being celebrated this year. Looking at the roll call of the top entries and winning projects, Africa truly has some outstanding talent. In six years, which of the project/s do you believe has been most impactful and sustainable?

All of the top entries and winning projects are impactful and sustainable because those two facets are central to the judging process. We also judge on the basis of commercial viability and scalability since a great idea can only go so far if it cannot sustain itself as a commercially viable solution. All past IPA winners have gone on to do well for themselves, taking their innovations further while impacting key sectors such as healthcare, agriculture, ICT, energy, environment and water, and also manufacturing and services. 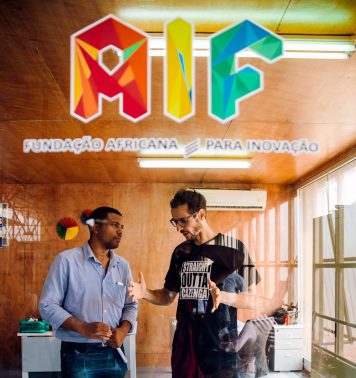 Are there areas of African innovation that in your view need special attention and investing in?

Innovations that deliver solutions to the region’s most pressing issues, such as access to electricity, clean drinking water, healthcare services and agriculture arguably deserve the most attention but it must be noted that innovation doesn’t have to be overly complex. Sometimes it’s the simplest of solutions that have the most disruptive impact. In my book, innovation is ultimately about building sustainable communities while improving productivity and profitability, which then creates a cycle of prosperity and transformation.

What would you like to see more of – you are on record saying you want innovation in Africa to be like a “virus”. Do you think many are catching this “virus”?

Unquestionably, yes. Don’t forget, Africa is one of the youngest continents, population wise. We are a continent of people who are coming of age in times when technology is moving at such an incredible rate and increased connectivity is changing how young Africans are learning, banking, shopping and doing business. And this so called innovation “virus” is not limited to a certain creed of Africans either. I have personally seen what can happen when you build an innovation hub in the middle of a slum, like I’ve done in Angola. I converted a derelict soap factory into a hybrid incubator, accelerator, makerspace, co-working space and cultural connector. It’s called Fábrica de Sabão. In the early stages, youth and children from the slums were intimidated by what was going on in the hub but within a short span of time, curiosity got the better of them. Today they are part of the organic transformation that is happening at the hub, literally before my eyes. There are kids involved in prototyping of alarm systems and solar powered mobile charging devices. They are using CNC machines and 3D printers to manufacture tiles and furniture from recycled materials. This is what the innovation virus is all about. I would like to see inclusive ecosystems like these evolve across every slum in Africa.

What role do all stakeholders, yourselves, the private sector and governments need to crucially play to sustain and up the momentum of innovation in Africa?

We all have a role to play in terms of raising the profile of African innovation and there are so many aspects to how we can achieve this. For organizations like AIF, our focus is on assembling African stakeholders (public and private) through platforms such as IPA to galvanize support for African innovators and create expanded opportunities for them to attract the right investments at a Pan-African and international level. Doing so will kick start a chain reaction that will ultimately lend itself more effectively towards economic diversification, job creation and prosperity for Africans.

Away from this remarkable passion you have through AIF and IPA, you are also a staunch supporter of the youth and their education, another area you have heavily invested in, more so in Angola. Talk us through your views on the state of education in Africa and why you do what you do?

Given today’s digital-led economy and Africa’s youthful demographic, conventional models of education are no longer relevant to Africa. Young African’s need to be equipped with whole new skillsets in order to participate more effectively in this interconnected and digitized world economy, which is why you see the push towards STEM education and such. On the other, education within the context of the informal sector cannot be neglected either. I’m actually more interested in this space and firmly believe the way to bring education to these classes of people is through creativity and innovation. Inclusive ecosystems such as Fábrica de Sabão are examples of how we can overcome the failures of the current education system and encourage new ways of learning that are faster and more productive. At the end of the day, what matters is for Africa’s future generations to be equipped with the right skillsets to be self-sufficient.

If I am correct, you originally planned to run the IPA for 5 years, this is now the 6th year. It must be because of its successfulness, including the projects supported so far, will you continue for more years and how far more?

Last year I pledged to support IPA for another five years. IPA has proven to be extremely successful in unearthing truly life-changing innovations and for this reason alone the IPA will continue to evolve and grow with the needs of African innovators.

Without giving too much away, what are we expecting to come out of the Ghana event?

Each year is different as our AIF network continues to grow. For me what’s exciting is that alongside the unveiling and discovery of a new batch of African innovations and meeting the brains behind them, I see more and more familiar faces from series past. IPA has truly created a family of incredible men and women from all parts of Africa who are united in our quest to catalyze African innovation. And of course, each host country has its own unique qualities and components that make up its innovation ecosystem. Ghana has a solid track record for its innovation intellect and I look forward to meeting its key innovation movers and shakers.