The Big Interview: Aliko Dangote – In for the long haul

The Big Interview | Aliko Dangote, Africa’s richest man, is optimistic that the only place to invest in today is Africa. Our Nigerian correspondent Osasu Obayiuwana talked to him in Lagos.

With a $10bn investment in the ongoing construction of a stateof-the-art refinery, as well as a neighbouring fertiliser plant, on the outskirts of Lagos – Nigeria’s commercial nerve-centre – not to mention his portfolio of projects across countries like Cameroon, Ethiopia, Tanzania and Zambia, the Kano-born billionaire looks, unsurprisingly, on the bright side of life.

“Investing in Africa is a longterm project. If you are thinking only of the short term, you shouldn’t invest in Africa at all. But it’s a very good place to invest in… Anybody who doesn’t invest in Africa will subsequently regret it,” he told me at his expansive refinery site in Ibeju-Lekki, a 45-minute drive from metropolitan Lagos.

“All these challenges that we are facing [as a continent] are not permanent challenges. They are temporary and they will go away. But you can only benefit if you are in line, which means you are already here.”

But, as even he admits, there are a few red zones that even a risk-taker like him would not touch with a bargepole.

“There are very few countries in Africa that I won’t go to, not more than five. And I don’t want to cause havoc, so I’m not going to mention those five to you,” he laughs.

For anyone who has tracked the continental investment footprint of the Dangote Group, North Africa has been the blind spot, as it has a presence in every other region of the continent but there. A member of the company’s management team, speaking off-the-record to New African, said that it had made a concerted effort to build a cement plant in Algeria but it did not get the cooperation that it needed from the government.

“Investing in Africa is a long-term project. If you are thinking only of the short term, you shouldn’t invest in Africa at all.”

“We shipped equipment and relevant materials into the country. But they would be kept at the port for months and months. We got so frustrated with all the bottlenecks that we had to abandon the project. It was really annoying,” he said.

But Dangote insists it is simply a matter of time before they establish their presence in the Maghreb.

“We’ve been to Libya several times and luckily we didn’t invest. You can see the situation at the moment. Egypt, which is the best of them all, was limping. I’m not saying that we are not going to go North Africa. We’ll go. Later.”

In contrast to North Africa, his company has made significant investments in East Africa, with the construction of cement plants in Ethiopia and Tanzania.

Situated in the politicallycharged region of Oromia, about 90km from Addis Ababa, the Ethiopian plant, commissioned in May 2015, has had a rough 18 months there, alongside other foreign companies in that region.

Dangote’s plant, alongside other foreign companies, were vandalised by protesters in October last year, with vehicles and machinery being burnt.

The government of Ethiopia, led by Prime Minister Hailemariam Desalegn, subsequently imposed a six-month state of emergency, lasting until April 2017.

Dangote admits the politically charged situation in Ethiopia does give him “a bit of concern”. “We’ve had attacks on our vehicles and also had a problem of some people burning some of our equipment, at the mines. But that doesn’t mean that I will start panicking.

“I know that once I invest in a developing country, there are issues you won’t be able to foresee. But you find a way to mitigate them…I have a lot of trust in the government and also the prime minister. I think he will do what is right for his people.”

Tanzania has also been a bit of a public relations challenge for the Dangote Group, when that country’s National Environmental Management Council (NEMC) slammed an $87,000 fine on the company, for infractions at its cement plant in Mtwara.

It was imposed last July, after an inspection by Luhaga Mpina, the Deputy Minister of State in the Vice President’s Office, revealed there was “hard waste” within the factory compound. The company had also failed to construct toilets at the site where truck drivers work.

Dangote admits that the relationship between business and governments, with the latter having to regulate their conduct, to ensure that the private sector behaves in a socially responsible way, is “a partnership” that is often fraught with challenges, owing to the competing and sometimes contrasting needs of the two.

It is a marriage of necessity, which has no choice than to work. “I keep telling people you cannot clap with one hand. You need two hands to clap. You need cooperation between investors and people in government, for them first to understand what you are up to and for you to also understand what they (the government) are up to.

“When you think that they are draining you, you try to advise them. And when the government believes that you’re not doing the right thing, they too have the right to tell you that.” 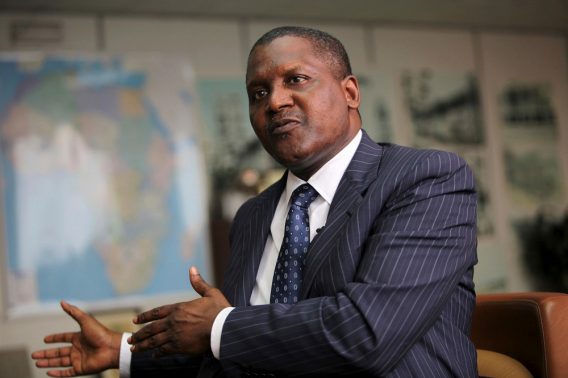 When talking about what influences his investment choices, Dangote has two basic principles, which he never violates. “First, I only enter a business that I can fully understand. I never enter a business that is not clear to me. The second principle is that I have to be able to become number one or, at worst, number two in that business.”

These principles perhaps inform his decision on why he took his time to make his entry into the petroleum industry, where he will certainly end up being the major player in Nigeria, with what could be the largest refinery in the world, with a capacity to refine 650,000 barrels of petrol each day.

Scheduled to come on-stream in 2018, it would finally end the inexplicable and scandalous situation of Nigeria, one of the world’s top oil exporters, importing petrol for its domestic needs, which has been a tremendous drain, for many years, on the country’s foreign reserves.

Dangote’s refinery will be the first privately owned one in Nigeria, previously exclusively a government preserve.

The government’s poor management of its refineries in Warri, Port Harcourt and Kaduna – none of which is functioning at 50% of their installed capacity, with repeated breakdowns common – has left it with no choice but to allow the private sector in, as it desperately seeks a solution to a longstanding, politically-charged problem.

If Dangote had his way, the Nigerian government would completely divest its interests in the oil and gas sector and leave the business in the hands of the private sector.

“The US government does not own one single oil block. They don’t own any business at all. They collect their taxes.

“I think the major part of government’s job is to collect their taxes. It’s for them to make sure that the environment is right for investment. When a company has exhausted its concessions and a tax holiday period, you should be able to also pay the government their own fair share [of income],” Dangote says.

Predictions for Nigeria’s economy, at the last National Economic Summit in Abuja, indicate that the country will require three years of restructuring for it to emerge from the current recession.

But the well-articulated position of the economist Dr Adedoyin Salami – who delivered the keynote address, to an audience including President Buhari – is that it may not begin to recover from the downturn until 2019, which did not have the support of a man whose view on the country’s economic landscape cannot be ignored.

“Salami said the right things. But I don’t share his views that we will remain in a recession, even up to the end of the year,” said Dangote, the single largest private sector employer in Nigeria. “To get out of the recession, there are a lot of things that you have to do. First, we must have currency stability.

“Investing in Africa is a long-term project. If you are thinking only of the short term, you shouldn’t invest in Africa at all.”

“And even if the sale of [oil and gas] assets is not the right way [to raise funds for the government] I do not even care. Let us raise loans, to shore up our reserves. This will give us enough time to work very hard, and quickly, to diversify the economy.”

Dangote has been severely criticised for advocating that the government should sell its shares in valuable assets, such as the Liquefied Natural Gas (LNG) plant in Bonny, to raise desperately needed funds. But the mogul is unmoved by accusations that he wants to buy these assets for himself.

Dangote also says the stinging criticism for Buhari’s government, over its management of the economy, is unfair.

At the sidelines of the World Economic Forum in the Swiss resort of Davos, he did tell New African that some of the wounds were self- inflicted. When the government agencies decided to withdraw their money from local banks for example, the international banks also withdrew their credit lines. Overnight, $12bn of trading money was effectively removed from the banking system. It is these unpredictable government actions and policy inconsistencies that need to be avoided if Africa is to attract more investment.

The other issue, of course, is power. At a panel in Davos, Dangote mentioned that in the state he comes from in Nigeria, with a population of 24m, the people are sharing 35MW of power, whereas “in our own business,” he says, “there is [a need for] standby power of 45MW. There is no way you can build small and medium sized enterprises with 35MW.” How is he dealing with the power shortage to see through his plans? “Taking what we have in the pipeline, we will be producing 2,000MW of power. At our fertiliser plant and refinery alone, we will be producing 980MW. And now think that in Nigeria, with a population of 187m, the country is producing on average 3,500MW, 4,000MW at best.”

Inevitably, the conversation finished with football. And Dangote is not immune to the power of the world’s most popular sport.

He has been a supporter of Arsenal, the English Premiership club, for over a quarter of a century and now wants to take his love for Arsenal up a notch. At the “right time,” he says, he will launch a bid for a controlling interest in the Gunners.

“David Dein, who used to be the vice-chairman of the club, was actually a very good business partner of mine. We had been dealing in sugar and that is when I developed interest and kept on going to their games. How Dangote will persuade the likes of Stan Kroenke and Alisher Usmanov, the major Arsenal shareholders, to sell shares to him, remains to be seen. But with a huge financial war chest, owning one of the world’s leading football clubs is certainly achievable.

It will simply be “mission accomplished” in the life of a mogul not good at taking “no” for an answer.