Since 2000, 422 large-scale land acquisitions totalling 10 million hectares – almost the size of the United Kingdom – have controversially been concluded between African governments and foreign investors, largely behind closed doors. Santorri Chamley investigates the implications.

As well as 422 African land acquisitions concluded since 2000, another 147 massive land deals adding 13.3m additional hectares are in the pipeline, according to a new report by The Land Matrix initiative. The report was jointly produced by the International Land Coalition (ILC), the University of Pretoria, the French NGO, Centre de Coopération Internationale en Recherche Agronomique pour le Développement (CIRAD) and several other partners.

Titled “Land Matrix Analytical Report II: International Land Deals for Agriculture”, it says that with 42% of all global land deals, Africa – which faces worsening land and water scarcity, threatening food production – is the region most targeted by foreign investors. With land being leased to wealthy foreign investors for up to 99 years at unjust giveaway prices –$1 per hectare per year in some of the poorest countries in the world – coupled with weak regulations and allegations of corruption, the new, post-colonial scramble for Africa is a bonanza for many.

Transnational corporations, private Indian companies, Arab sheikhs, foreign governments and City of London and Wall Street equity funds are among the swathe of foreign investors that have acquired vast tracts of farmland in Africa.

The continent is seen as the “last frontier”, where foreign investors can generate high returns, particularly in energy and food production, following the 2008 global food crisis. The vast areas of land they are acquiring are largely for biofuel and food production for domestic and export markets, including to high net food importers including China, India and Saudi Arabia.

Another African pull is cheap labour and a largely untapped consumer base. The corporate capture of African agriculture is largely being blamed on a new style of radical, public-private partnerships, which G8 countries and their allies are bankrolling to stimulate a “uniquely African Green Revolution” in a major shift in development aid. The trumpeted, multi-billion dollar initiatives include the G8’s New Alliance for Food Security and Nutrition in Africa (NAFSA), the Bill and Melinda Gates and Rockefeller Foundation’s Alliance for a Green Revolution in Africa (AGRA) and the US government’s global hunger and food security programme, Feed the Future. They have all heroically pledged to tackle poverty, improve food security and gender inequality in African agriculture and bring benefits to small-scale African food producers. They have also promised to support sustainable agriculture. A man stands by seedlings at the Sierra Leone plantation of Lichtenstein-based firm, Socfin.

They plan to achieve these laudable goals by championing the private sector, including biotech giants Monsanto and Syngenta, to achieve rapid industrial agricultural growth to meet the food needs of Africa’s growing population, which is projected to double to 2.4 billion by 2050.

Participating African countries have committed to a policy and legislation overhaul to facilitate increased private-sector investment and trade. But instead of reducing hunger and poverty, food campaigners warn, the initiatives will push the profit-driven interests of multinationals. Concerns are echoed in several scathing reports on the New Alliance by Actionaid and the European Parliament.

Sudan, Ghana, Mozambique and Ethiopia are the most targeted African countries, with most largescale land acquisitions concentrated along major rivers and in East Africa

Food campaigners have accused G8 nations of reneging on the commitment they made at their L’Aquila summit in Italy in 2009, where they pledged $20bn to support “country-owned” strategies for food security, nutrition and sustainable agriculture, reinforcing the Comprehensive Africa Agriculture Development Program (CAADP). The CAADP was sanctioned at the AU Heads of State Summit in Maputo in 2003 as a New Partnership for Africa’s Development (NEPAD) programme. African governments committed to increase agriculture production and pledged at least 10% of national budgets to the sector to boost growth.

The New Alliance is the G8’s main strategy for supporting agriculture in Africa. It was put together by President Barack Obama and big agribusiness at the G8 summit at Camp David in 2012 and funded by the US, UK, France, Italy, Canada, Japan, Germany and Russia, which have committed $4.4bn to 10 countries that have signed up to the initiative. The US and EU are its biggest funders.

Burkina Faso, Benin, Côte d’Ivoire, Ethiopia, Ghana, Malawi, Mozambique, Nigeria, Senegal and Tanzania are the 10 African countries that have signed up to the initiative. According to Actionaid, a total of 180 transnational and African corporations including Monsanto, Diageo, SABMiller, Unilever and Syngenta, are participating in the New Alliance, planning to invest $8bn in African agriculture, in the 10 participating African countries.

The $150bn Alliance for a Green Revolution in Africa (AGRA) was launched in 2006. Its key donor and development partners include the Bill and Melinda Gates Foundation, the Rockefeller Foundation – the two founding organisations – the Swedish Ministry of Foreign Affairs, UK’s DfID, USAid, the International Development Research Centre and Luxembourg. The World Bank, Norwegian fertilizer company, Yara International and US food giant, Cargill Inc are also partners.

Partners of Feed the Future, the US presidential global hunger and food security initiative, is also operating in many African countries. This includes Ethiopia, Ghana, Liberia, Malawi, Rwanda, Tanzania and Zambia. Smallscale African food producers, the backbone of Africa’s traditional farming systems, are expected to largely benefit as outgrowers.

The Grow Africa Partnership, which was founded by the AU and other partners, brokers collaboration between governments and international and domestic agribusiness, partnering through the “green revolution” initiatives.

Nigeria, whose New Alliance partner is the UK, is allocating 350,000ha of land to eight companies. Three of them, Dominion Farms, PZ Wilmar and Okomu Oil Palm Plc, are involved in land grabs in the country, the report alleges. It says the Nigerian government is also promoting staple crop processing zones (SCPZs), supported by the UK’s DfID, where investors are “guaranteed land acquisition”, benefit from “low average wages” and are given tax holidays. Small but densely populated Malawi, whose New Alliance partner is the EU, has agreed to release 200,000ha for large-scale commercial agriculture. But Actionaid’s report says its National Export Strategy, whose recommendations are incorporated into the New Alliance Cooperation Framework, allocates 1m ha to commercial farming, or more than a quarter of all arable land in the country where access to land remains unjustly unequal.

Amendments to Malawi’s Land Bill give full power to ministers and local government to grant leases over public land without public consultation and there is no limit on the amount that can be allocated.

According to the report, Tanzania, whose New Alliance Cooperation Framework is being coordinated by the US, has allocated 350,000ha to large companies in the flagship Southern Agricultural Growth Corridor (SAGCOT) project, funded by the US and UK. Evidence increasingly shows that SAGCOT will largely benefit big agribusinesses. Actionaid says it documented a land grab case in the SAGCOT region, involving plans by the Swedish sugar company, EcoEnergy to push rural communities off their land.

A 2015 European Parliament report by the UN Special Rapporteur on the Right to Food, Olivier De Schutter, also takes issue with CCFs under the New Alliance framework. The report, “The New Alliance for Food Security and Nutrition in Africa”, says they are glaringly silent on the need to shift to sustainable agriculture; support for local seed systems and dangers associated with the emergence of a market for land rights including fast-tracked titling without considering the consequences for land-poor farmers as well as failing to address the needs of women. 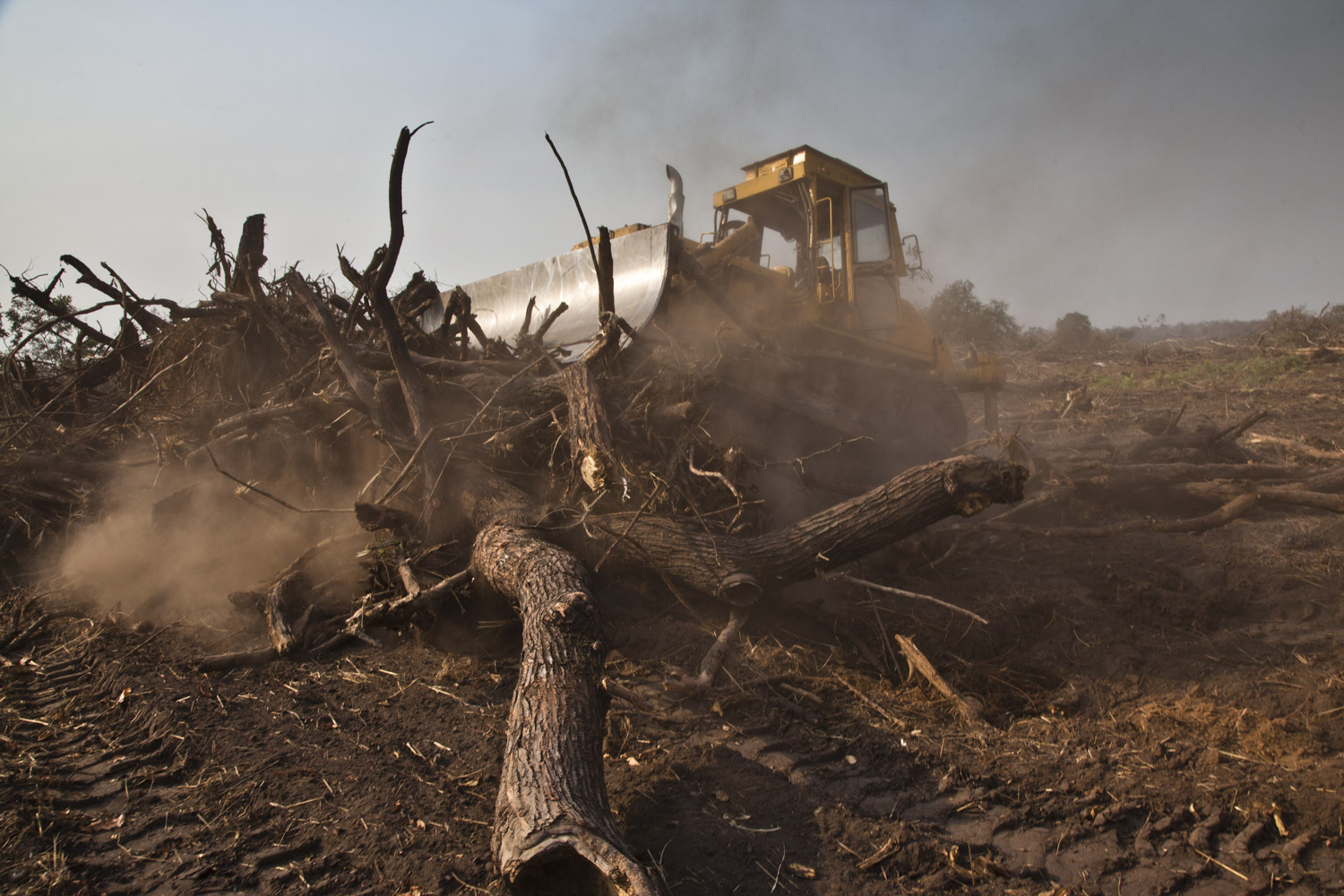 Ethiopia, Gambella. Bulldozers are preparing the ground for oil palm and sugar cane plantations around the Karuturi facility.

Notably, the report adds that whereas some Africa-based companies play an important role in the New Alliance, two companies are significantly leading – the Swiss seed company Syngenta and Norwegian fertilizer company, Yara International, which have pledged $500m and $1.5bn.

It says that in SAGCOT, foreign investors are mostly interested in developing large-scale nonlabour intensive plantations that contribute relatively little to rural development. The report is calling for the EU and its member states to address the shortcomings in CCFs as a condition of continued support for the New Alliance. The blanket harmonisation of Plant Variety Protection modeled on the stringent Union for the Protection of New Varieties of Plants (UPOV) 1991 – which is being implemented via regional economic communities including ECOWAS and SADC – is also a concern.

Haidee Swanby says African governments are being pressured by the seed industry and other vested interests into adopting stringent UPOV 1991 aligned PVP regimes. UPOV is advancing the interests of the formal seed industry and gives greater protection to breeders while undermining the ability of farmers to recycle, trade, or exchange farm-saved seed. She and other campaigners are worried that wholesale application of UPOV 1991-style PVP regimes could ultimately enslave small-scale African farmers to biotech giants.

When New African asked Peter Button, Secretary-General of the Geneva-based UPOV to confirm this, he said: “Most countries and intergovernmental organisations, which have introduced a Plant Variety Protection system, have chosen to base their system on the UPOV Convention in order to provide an effective, internationally recognised system. It would not be appropriate for the UPOV Office to comment on WTO and its agreements, including the TRIPs Agreement.”

A new report by the Corporate Europe Observatory highlights the alleged heavy lobby pressure African governments have come under from bio-tech giants whose goal, it says, is to conquer Africa’s vast new market, supported by strong patent protection and promotion of the “We Feed the World” argument for GM. The report, “Monsanto Lobbying: An Attack on Us, Our Planet and Democracy” alleges the seed giant and others have funded several platforms and lobby groups to promote GMs in Africa.

A woman holds a banner as about one hundred people march to protest against Biotechnology giant Monsanto at the North Beach in Durban, on May 21, 2016. / AFP PHOTO / RAJESH JANTILAL

Its member list includes agribusiness giants such as Monsanto, Bayer, BASF, Dow/ Dupont and Syngenta. In September 2016, Monsanto agreed to a $66bn takeover bid by Bayer AG. According to media reports, Bayer aims to create a onestop shop for seeds, crop chemicals and services for farmers. In October 2016, Monsanto was the subject of a three-day “moral trial” in The Hague, in the Netherlands. The mock trial called for the International Criminal Court (ICC) to take action against the controversial US biotech giant for “ecocide”-related charges.

The UK’s Department for International Development has said, however, that the development of agriculture in Tanzania is essential for economic growth, food security and reductions in poverty and that this will only be achieved by investment in both commercialscale modern agriculture and improving productivity and the livelihood of small-scale farmers. It added that the agriculture sector is a key focus of the UK’s work in Tanzania and UK aid has helped increase the incomes of 446,000 households.

But in contrast to Olivier De Schutter’s report, DfID says “the majority of private sector investments in Tanzania under the initiative come from Tanzanian companies including two smallholder farmer’s organisations – the Tanzania Horticulture Association and Agriculture Council of Tanzania. All UK-supported programmes and investments under the New Alliance are socially and environmentally responsible.”